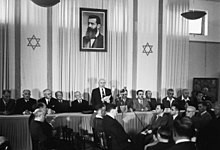 15th May 1948 David Ben-Gurion declares independence for the State of Israel underneath a picture of the founder of political Zionism, Theodore Herzl.

This year represented the beginning of Israel’s short, arduous and eventful journey towards being the most liberal democracy in the Middle East, providing Israeli’s and diaspora Jews alike with a homeland and cultural identity.

During 1948, following the declaration of the State of Israel, a 10-month war broke out with Israel’s Arab neighbours. Yom Ha’atzmaut (the day of independence) is marked by Arabs as the Nakba day (meaning disaster). The war was won by Israel while maintaining most Israeli territory as per the 1948 borders.