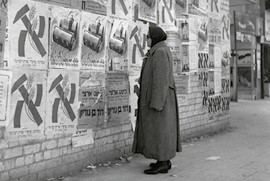 Probably the most important event in 1949 is the election of the First Knesset, as highlighted by the picture above, where a woman weighs up some of the options open to her at the ballot box. This somewhat lacks the drama of the establishment of the State of Israel, none of the pure euphoria of our national rebirth in a sovereign state in our own land. After the excitement of 1948, 1949 might feel like a disappointment.

Indeed, the other events of this year can add to that impression. Chaim Weizmann is elected President. Cities are built, laws are passed, armistices signed. For many Israelis, life would have gone back to normal after the fraught moments of war. Indeed, rationing and austerity are introduced to deal with the influx of olim and the difficult economic situation. If you were reading a history book, these would be the paragraphs you skim over, making sure you don’t miss anything, but not reading too intensely.

For example, the city of Yavneh on the coastal plain just south of Tel Aviv, has its first neighbourhoods built. Hardly gripping stuff.

To give some context, Yavneh was the city which saw the birth of modern Rabbinic Judaism. Around the time of the Destruction of the Temple, Rabbi Yochanan ben Zakkai was stuck in besieged Jerusalem. To escape, so he could plead with the Romans, he faked death and escaped in a coffin. Once out of the city, he met with Vespasian, and risks certain death when he greets him as if he were the Emperor. Vespasian nearly gives him the death penalty for this, when a messenger arrives saying that the Emperor has died, and Vespasian is the new Emperor. Before leaving for Rome, he granted Rabbi Yochanan ben Zakkai one request. Rabbi Yochanan, knowing that Jerusalem will be destroyed, replies, “Give me Yavneh and its sages.” In Yavneh, Rabbi Yochanan and his friends begin to debate and discuss halacha, creating the rabbinic Judaism we live with today.

This story, I think, highlights why the second year is more important. The exciting part of the story is his escape from Jerusalem and meeting with Vespasian. The unexciting part, to be honest, is the creation of Rabbinic Judaism. But without that, we would not have halacha, mitzvot and Masorti Judaism which we live out every day of our lives. Rabbi Yochanan’s exciting escape from the city and confrontation with Vespasian were merely the start of a process that we are obligated to continue.

So too with the State of Israel. We see 1948 as the ultimate climax of Zionism. The point at which our national aspirations were realised. But really, 1948 was only the start. With the creation of the State of Israel, we only returned to the position we lost when the Second Temple was destroyed in 70 CE, we fled Jerusalem and descended into Exile.

Rather than seeing 1949 as a return to boredom after the excitement of 1948, we should see it as our return to a normal existence.

The poem and picture above really resonate with me for that reason. A woman looking at an election poster, or a man buying vegetables might seem boring at first glance. On deeper reflection, we can see how extraordinary it is that a Jewish woman would have the ability to vote and choose between multiple competing parties in a Jewish democratic state. That a Jewish man would be able to live in Jerusalem and buy vegetables for his family. The exciting bit of Israel is not the military victories or grand political events. Rather, it is how it gives the mundane elements of our life much greater meaning. Buying vegetables from the market, looking at election posters written in Hebrew become inherently liberating acts.

It’s the boring, mundane, routine stuff that proves the State of Israel is fulfilling its redemptive promise. 1949 was the first full year in which Jews in Israel began to truly live liberated, meaningful lives by doing mundane, boring things. Let’s hope that we can one day emulate them, and, by making aliya, make the mundane elements of our live inherently meaningful.

Visits of condolence is all we get from them.
They squat at the Holocaust Memorial,
They put on grave faces at the Wailing Wall
And they laugh behind heavy curtains
In their hotels.
They have their pictures taken
Together with our famous dead
At Rachel’s Tomb and Herzl’s Tomb
And on Ammunition Hill.
They weep over our sweet boys
And lust after our tough girls
And hang up their underwear
To dry quickly
In cool, blue bathrooms.

Once I sat on the steps by agate at David’s Tower,
I placed my two heavy baskets at my side. A group of tourists
was standing around their guide and I became their target marker. “You see
that man with the baskets? Just right of his head there’s an arch
from the Roman period. Just right of his head.” “But he’s moving, he’s moving!”
I said to myself: redemption will come only if their guide tells them,
“You see that arch from the Roman period? It’s not important: but next to it,
left and down a bit, there sits a man who’s bought fruit and vegetables for his family.”

(Disclaimer: the poem, though beautiful, was not written in 1949)