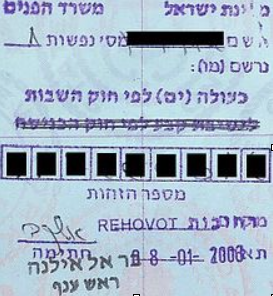 On the 5th of July 1950, the Knesset ratified חֹוק הַשְׁבוּת‬, (the law of return). This is the law that allows any Jewish person to settle in the land of Israel and become an Israeli citizen. I have chosen to think about this event because it goes some way to encapsulating the complexity of Israel and my relationship to it.

On one hand this law seems a wonderful thing. It is the law that gave Holocaust survivors somewhere to go; that gave my family somewhere to go when, after their liberation from concentration camps, they returned to their former home only to be faced with virulent anti-Semitism. It is a clear enactment of Zionism – declaring to the world that the Jewish people have found their national homeland.

Yet, as is so often the way with Israel, it is not a one-sided story. As it was enacted the law only applied to those considered Jewish according to Orthodox interpretations of halacha. Although the definition of a Jewish person was widened to include those with Jewish heritage (to reflect that the Nuremberg Laws did not persecute people on a halachic understanding of Jewish identity) and those who had converted to Judaism in 1970, the law continues to be proved problematic for those who are not Orthodox.

In 2011 the Ministry of the Interior delayed granting citizenship to the husband of a Jewish man despite a clause which states that the spouse of the Jewish returnee must also be granted citizenship. Additionally, my support for the law is complicated by the lack of a similar law for Palestinians. The law, which is partially designed to maintain the Jewish majority in Israel, has been accused of being an example institutionalised ethnic discrimination. It is plagued by two of the biggest issues Israel continues to face – that of the Orthodox hegemony and the reduction of non-Jews to second class citizens.

Thus, in my understanding of the law of return, I see a microcosm of my relationship to Israel. I am a Zionist. I believe in Israel as the home of the Jewish people. I personally indebted to the existence both of Israel and specifically the law of return. And yet it is always more complicated than that.