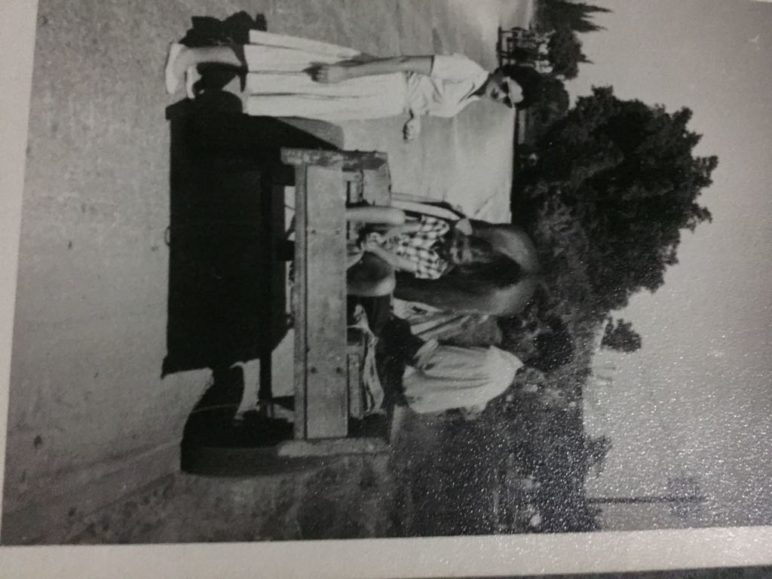 While 1952 was a busy year in Israel’s history, seeing the Reparations Agreement between Israel and West Germany signed, the death of President Chaim Weizmann and the election of Yitzhak Ben-Zvi as the second president of the State of Israel, I would like to take a journey away from the corridors of political power. In 1952, I want to invite you to a harsh patch of land where American, Canadian and South African immigrants to Israel were founding Moshav Orot (‘Lights’), where, nine years later, my mother would be born.

Apart from the Moshav’s Hebrew website there’s not much to read online about Orot. So, on my fact-finding mission I WhatsApp-called my grandma Zita Miller, who, luckily, had her phone on her. This is not to be taken for granted when you’re trying to get in touch with an 87-year-old who lives in South Africa.

After our initial greetings – ‘Guyli, is that you? Did you call me by mistake?’; ‘Hi Gran, no I phoned on purpose! I’m helping my friends with a project on Israel’s history and I wanted to talk to you’ – I asked her to tell me what it was like living on the Moshav. Here’s what she said (anything in square brackets are extra details that I’ve added for clarity, and any writing in bold are things that I said during our conversation):

“About 50 families started it, and we [Zita, my grandpa Ben and my aunt Judith] came over from South Africa in 1958. The whole idea of moving to Israel and living on a Moshav was very attractive. When we arrived, the road we lived on was completely new; it wasn’t paved yet and there were no trees. Now the trees have grown tall and it looks marvellous! It was a Moshav Ovdim – every family owned their own farm but we worked as a cooperative and everyone’s produce went to market together.

“There was a Mazkir who ran the place who came from Belgium. He was Flemish so he understood our Afrikaans and we couldn’t hide anything! We had a machsan (warehouse) where we stored fertiliser and cowfeed but no markolet (grocery store), so we had to go to the neighbouring villages to buy things. It was very easy to bring up children on the farm. There was a very good kindergarten, and a school in Be’er Tuvia (a neighbouring moshav).

“All the buildings were pre-fabricated and came from Sweden. Our pre-fab house was wonderfully well made and well insulated. You could move the walls as you can imagine [I couldn’t imagine]. We brought furniture from South Africa and made it look lovely. Did it feel like home? It was my home! I cried when I had to come back.

“Our farm first had vegetables and cows [according to my Mom, their favourite cow was called Poppysnoeks], then we changed to peach and apricot trees, then we had a lul (brood house for chickens) [my Mom still feels nostalgic at the smells of a chicken coop]. We also worked in the fields and you had to work hard; you would wake up at 4 in the morning to work in the fields and get back at 10 at night. They [the Mazkirut (council)] expected one dunam [1000 square metres] of land to produce 12 tonnes of tomatoes in one season, and if you couldn’t do it you were no farmer! I remember the wonderful celebrations for Shavuot where each village brought produce to sell and we gave the money to charity. Our farm brought artichokes.

“When Lior [my Mom] was born in 1961 we were very excited. She was our second child and she was 7 years younger than Judith. They had a lovely time on the farm. We had lots of friends – Leah and Benno Shorr, Scotty and Chaim Sacks, the Shapiros who lived next door… It was a good chevra, it was okay. When we were there, there were no wars, but we were next to an air force base and they broke the sound barrier regularly and made a hell of a noise.

“We had to move back to South Africa in 1966 when Lior was 5 because Benny was ill. We went to Bloemfontein but still stayed in touch with our friends. I missed the people and the place for a long time. Most of my friends have died now but I spoke to Scotty last week. She now lives in Kfar Kisch (a moshav close to Tiberias).

“I went back to visit with your mom when she was living in Israel with your dad, before they were married. Was it the same? It was and it wasn’t. It looked like a different place. It was a softer landscape; the trees had started to grow.[My grandpa Ben planted a poplar tree outside their house when they lived on Orot, which is now at full height]

“Are there any more strong images or memories that come to mind when you think of being there? Not anymore ­– you’ve tired me out! Call back later and maybe I’ll have more to tell you. Are you having a nice time in Israel [at the Conservative Yeshiva]? Yes I’m having a brilliant time. That’s great, zei gezunt. Just don’t come back with any funny peyot or something.”