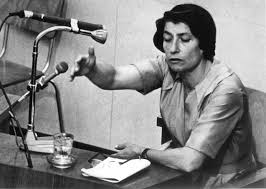 On April 11th, 1961 the trial of Adolf Eichmann began in Jerusalem, Eichmann having been recently captured by Mossad after going into hiding in Argentina. He was charged on 15 counts of war crimes and crimes against humanity, including responsibility for the enslavement, starvation and murder of millions of Jews, and the deportation of hundreds of thousands of Poles and Gypsies. This is the first televised trial in history, as Prime Minister Ben Gurion wanted to educate the world on the atrocities of the Holocaust.

It was a deeply emotive and harrowing trial. Eichmann sat in a bullet proof glass box while listening to 112 witness statements. They told their stories in detail, which for many was the first time they had opened up so honestly and entirely since the Holocaust.

Eichmann used the same line as many other Nazis who had been on trial, that he ‘was only following orders’. Not only was he a Nazi, but he oversaw and organized the transportation of millions of Jews directly to extermination camps, and on December 15th, 1961, he was found guilty on all counts and sentenced to death.

This is important to me because it is symbolic of the persistence and strength of the Jewish people. They stood together, in their still young homeland, to bravely explain the atrocities they had suffered, to this man and to the international population. They would not let the world forget, and they would fight for justice for themselves, their families, and the whole community.