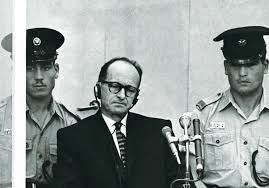 Following his arrest in 1960, Adolf Eichmann was sentenced was sentenced to hang for war crimes, crimes against humanity, and crimes against the Jewish people; eventually bringing him to justice after his involvement in the Holocaust. Eichmann was key in the facilitation of the ‘Final Solution’, and in the coordination of capturing Jewish people and transporting them to death camps. Up to four million Jews are said to have died as a result of his orders.

On the night of May 31st 1962, Eichmann was executed by Israel. His execution was in some ways controversial, as Israel officially abandoned the death penalty in 1954, though exceptions were to be made for extreme crimes like genocide and treason. A meeting of thirteen ministers to debate the ruling resulted in eleven voting for Eichmann’s execution, with the other two ministers (Levi Eshkol, who would later become prime minister, and Yosef Burg) arguing that imprisoning Eichmann for life would be a more significant and painful punishment, forcing Eichmann to suffer longer for his crimes.

To me, this is an important moment in both Israeli and Jewish history. Seventeen years after the liberation of the concentration camps, individuals were being brought to justice and held accountable for their participation in the Holocaust. The argument that the Nazis were ‘just following orders’ was no longer enough to justify their actions. Arguably, justice for the Holocaust and the six million who died will never truly be achieved, but Eichmann’s execution, and by the country that provided a refuge for the very people that he tried to destroy, is an important act of defiance. His trial was also the first televised trial in history, and therefore stood to prove to audiences around the world that the events of the Holocaust undeniably took place, and its impacts are still being felt today.