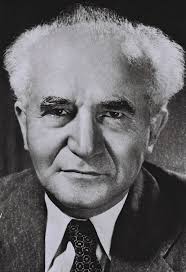 David Ben-Gurion stepped down as prime minister for personal reasons in June 1963. Despite a brief hiatus, it was Ben-Gurion who had led Israeli through its formative decade, through a war and through the foundations of what Israeli society would come to be.

Israel’s ‘founding father’ built up state institutions, oversaw the absorption of Jews from all corners of the globe as well as pursuing conciliatory foreign policy such as the Reparations Agreement between Israel and West Germany.

Whilst Ben-Gurion in known for his political leadership later on in his life, what interests me is his early years living in Plonsk in Poland. In c.1900, Ben-Gurion’s dedication to Zionism and Jewish studies galvanised him to establish a youth organisation, ‘Ezra’, which later helped to found the ‘Poalei Zion’ (the Marxist-Zionist Jewish workers’ party) in Poland. Ben-Gurion’s connection to the dream of emigrating to Palestine, his understanding of religious texts and his leadership ability were undoubtedly shaped through his experience of ‘Ezra’ as a youth leader.

The world around us today in 2018 would have been inconceivable to a young Ben-Gurion at the turn of the 20th century in Poland. However, one constant remains. Dedication to Zionism, Jewish education and religious values form a crucial part of the Noam experience and the legacy of Jewish youth movement continues to be a force for good in the world, inwardly through education and hagshama atzmit and outwardly, through tikkun olam and gemillut chasadim.