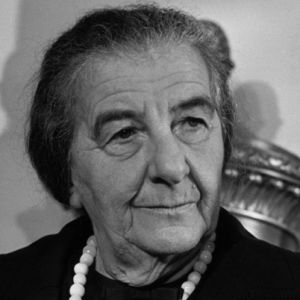 1969 was a year nestled in a period of global dynamism. The swinging sixties
were drawing to a close, hippy culture was crystallising into the
flower-power civil demonstration of People’s Park and the festival at
Woodstock, the neoliberal school of economics was beginning to wield
significant influence in Western government, and throughout the Middle
East the pan-Arabist movement was beginning to fracture. Israel was two
years deep into a war of attrition following the 6 day war in 1967, and was
militarily occupying the entire Sinai desert, previously belonging to Egypt -
where president Nasser had attempted and failed - to unite the pan-arabist
movement.
Among this period of military prowess, following the spectacular victory in
1969 and the impregnable defense of the Bar-Lev line on the eastern side of
the Suez canal, Israel elected its first woman to the role of prime minister.
Born in a shtetl in Ukraine, raised in Milwaukee, and shaped by intellectual
evenings spent discussing socialist Zionism and women’s suffrage in Denver,
the yiddish speaking Golda Meir moved to British Mandate Palestine in 1921
to join the Merhavia Kibbutz. Golda typified the early socialist Zionists, an
atheist with strong Jewish identity of culture, she was an active member in
the Poale Zion movement (which later became Habonim), was elected
secretary of the Working Woman’s Council, and eventually became elected as
the head of the political department largest trade union organisation in the
country, the Histadrut. In 1938, after representing the Jews in Palestine in the
Evian Conference - where heads of state lamented the plight of Jews in Nazi
Germany but refused to accept them as refugees - Golda said ‘T here is only
one thing I hope to see before I die and that is that my people should not
need expressions of sympathy anymore’.
Through her career as a foreign diplomat, the minister of Labour, the foreign
minister, Golda Meir’s ascension to prime minister represented for Israel a
realisation of the principles of Socialist Zionist movement. She was the fourth
woman ever elected to the head of a government in modern history, and she
was an atheist and proud kibbutznik socialist. For the triumphant culture of
liberal Israel, the election of Golda was validation. The country still had all
the other kinds of xenophobia, but mixed with the afterglow of the euphoric
victory of 1967, the continued military prowess of the War of Attrition with
Egypt, a healthy growing economy and the development of homegrown
Israeli rock music, 1969 was a good year for Israel.