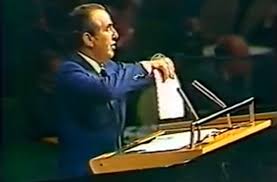 The United Nations Assembly Resolution 3379 was passed on the 10th November and stated that “Zionism is a form of racism and racial discrimination”. The vote took place following Yasser Arafat’s “olive branch” speech to the general assembly in November 1973, and the resolution was passed a year later with the support of soviet-aligned nations in addition to the Arab and Muslim majority countries with the final vote being 72 countries in favour, and just 35 opposed (and 32 abstentions).

Chaim Herzog who was the Israeli ambassador at the time and later became Israel’s sixth president famously responded by saying that the measure was “based on hatred, falsehood and arrogance”, insisting it was “devoid of any moral or legal value.” Today, many supporters of Israel still argue that the resolution was a product of anti-semitism.

The resolution was revoked on 16th December 1991, which stands as the only UN resolution ever to be revoked. Israel had made the revocation a condition of its participation in the Madrid Peace conference and was raised under pressure from the administration of President George Bush. The motion was supported by 111 nations, opposed by 25, and 13 abstained.