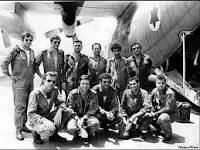 On the 27th June 1976, 4 hijackers seized an Air France flight flying from Israel to Paris via Athens with 250 people on board. The hijackers (2 from the Popular Front for the Liberation of Palestine and 2 from Germany’s Baader-Meinhof gang, plus 3 others) diverted the plane to Entebbe, Uganda where it arrived on the 28th June.

The hijackers were demanding the release of 53 militants held in jails in Israel and 4 other countries. Ugandan President Idi Amin arrived at the airport and gave a speech in support of the PFLP and even gave the hijackers extra troops and weapons. On the 1st of July, a large number of hostages were released, but the hijackers kept captive the remaining 100 Jewish or Israeli passengers.

In a spectacular rescue mission, Israeli commandos rescued most of the hostages, as 20 Ugandan soldiers, 7 hijackers and 3 hostages lost their lives.

An elite force of Israeli soldiers travelled on a 2,500-mile trip from Israel, flying at a height of no more than 30m (100ft) to avoid radar detection arrived in Entebbe at 23:00 on the 3rd of July. They then travelled in a black Mercedes car (this was the car that looked like Idi Amin’s vehicle) accompanied by Land Rovers to arrive at the scene where 200 troops ran out and stormed the airport building, taking the hijackers by complete surprise. The leader of the force was current Prime Minister (for now) Bibi Netanyahu’s brother Yonatan who was shot dead by a Ugandan soldier.

The operation was a success, and the story is almost like something that could only have been depicted in a film.