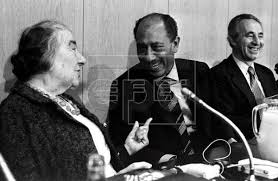 Anwar Sadat, the third President of Egypt, made history in 1977 when he became the first Arab leader to officially visit Israel. On 19 November, Sadat met with Israeli Prime Minister, Menachem Begin, seeking a permanent peace settlement. This was four years after Sadat led Egypt in the Yom Kippur War to regain Egypt’s Sinai Peninsula. The day after arriving, Sadat prayed at the Al-Asqa Mosque, visited the Church of the Holy Sepulchre and the Yad Vashem Holocaust Memorial, before heading to the Knesset to give his speech. In his address, Sadat said that if this chance for peace was “lost or wasted, the plotter against it will bear the curse of humanity and the curse of history”. Sadat’s visit heralded twelve days of secret negotiations at Camp David a year later, the signing of the Camp David Accords, and the 1979 Egypt-Israel Peace Treaty. This photo shows Sadat shaking hands with former Israeli Prime Minister Golda Meir, with Shimon Peres on his other side, on November 21st in the Knesset building.