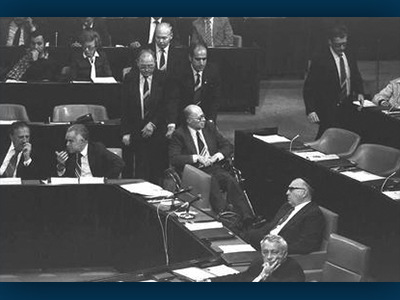 On the 14th December 1981, the Knesset annexed the Golan Heights.

The law simply stated: The Law, jurisdiction and administration of the state shall apply to the Golan Heights…

The reaction from the international community was swift. The United Nations Security Council unanimously declared three days later that the law was “null and void and without international legal effect”.

Israel maintains that the law was consistent with UNSC resolution 242 of 1967, after the Six Day War which calls for a just and lasting peace built on:

Termination of all claims or states of belligerency and respect for and acknowledgment of the sovereignty, territorial integrity and political independence of every State in the area and their right to live in peace within secure and recognized boundaries free from threats or acts of force

On one hand we have a de facto annexation of Syrian land by “Israel, the occupying power” and on the other, a country trying to defend itself.

So who is right? This is not an easy question to answer. Let’s just explore the tip of the iceberg when it comes to international law and the Arab–Israeli conflict which will show you why questions like this are so widely disputed.

This is the argument over an absent “the”.

UNSC 242 mentioned earlier contained another provision on which peace should be built on:

For those fluent in both French and English, you may have noticed that the French version asks for the withdrawal from “des territoires occupés” which, French grammatical experts say, can only be translated as “from the occupied territories”. Notably the English did not include the definite article. So was the UN calling for a withdrawal from all territories occupied during the war or just some necessary for peace?

With such ambiguity, one can guess which viewpoint each side took. Let’s try to get to the bottom of it.

What about if I told you as it was the British proposing the resolution, the text was voted up in English. So surely that must mean the English takes precedence?

Nope. Under UN rules, both the English and French versions are equally valid and the language of the text agreed in both. So if the English is ambiguous and the French not, does this support the “all” viewpoint?

That can’t be the case because an amendment before the resolution was adopted to change “territories” to “all territories” was rejected. Marvellous.

I won’t even touch on the Vienna Convention on the Law of Treaties and how it comes into play here. With arguments over something seemingly so insignificant as a missing “the”, peace seems far off.

Since their capture, Israel has offered to trade the land back for peace unsuccessfully and today the Golan Heights are still internationally considered to be Syrian territory occupied by Israel.