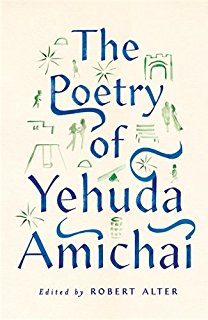 Yehuda Amichai (1924 – 2000) is regarded by many, both in Israel and internationally, as Israel’s greatest modern poet. His contribution to Israeli culture was formally recognised when he received the Israel Prize for Hebrew poetry in 1982, the most prestigious honour the country can bestow upon a citizen.  The prize citation read, in part: ‘Through his synthesis of the poetic with the everyday, Yehuda Amichai affected a revolutionary change in both the subject matter and the language of poetry.’

While leading Roshim training last summer I was lucky enough to be taken on a Tour of the Old City of Jerusalem by Robin Moss of the UJIA. It would be nice, I thought, but I had walked round the Old City dozens of times already with many a tour guide. I wasn’t sure if I was going to learn anything new or exciting. Oh how wrong I was! For the next hour or so, Robin led us through the streets of Jerusalem using the poems of Amichai as a means to guide us. I was enchanted by this innovative method and through the words of the poet, transported to different imaginings of the Holy City. I came away seeing Jerusalem in a new light with a heightened appreciation for Amichai’s poems. If you haven’t read a poem by Yehuda Amichai I urge you to go and do so right now – go, go go!