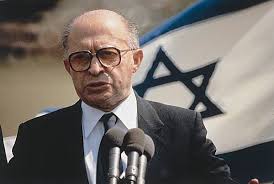 By Ava Sharpe (Bogeret and Madricha)

The Political Legacy of Menachem Begin

Following a resounding political career as Israeli Prime Minister from 1977, 1983 saw the end of an era for Zionist leader Menachem Begin. After commanding the militant paramilitary group Irgun Zvai Leumi from 1943-8, Begin formed the Herut ‘Freedom’ Party and became the official leader of the opposition in the Knesset until 1967, before becoming joint chairman of the Likud coalition in 1973. Following a Likud victory in 1977, it was down to Begin to form a government.
The contemporary question remains as to the nature of Begin’s political legacy, not only to native Israelis, but Jews in the diaspora. Begin is perhaps best known for his dogmatic, uncompromising stance on the question of occupation of the West Bank and the Gaza Strip following the Arab-Israeli War of 1967 and the 1982 government mounted invasion of Lebanon in an effort to oust the Palestine Liberation Organization (PLO) from its bases there. However, Begin’s peacemaking efforts cannot be understated in the formation of the diplomatic values underpinning the modern Jewish state. Begin negotiated with President Anwar el-Sādāt of Egypt for peace in the Middle East, and the agreements they reached, known as the Camp David Accords (September 17, 1978), led directly to a peace treaty between Israel and Egypt that was signed on March 26, 1979. Under the terms of the treaty, Israel returned the Sinai Peninsula, which it had occupied since the 1967 war, to Egypt in exchange for full diplomatic recognition. Begin and Sādāt were jointly awarded the Nobel Prize for Peace in 1978. However, Israel’s continuing involvement in Lebanon, and the death of Begin’s wife in November 1982, were most likely among the factors prompting him to resign from office in October 1983. Peacemaker or terrorist- it remains of astute importance that the critical issues surrounding the legacy of contentious Israeli political figures truly remains at the forefront of contemporary nuanced Zionist education.