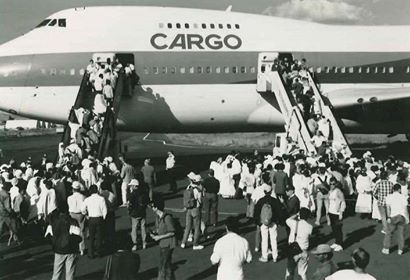 By Shanie Earl (Bogeret and Madricha)

In November 1984, the first group of Ethiopian Jews arrived in Israel through ‘Operation Moses’. This operation facilitated the undercover evacuation of Ethiopian Jewish individuals from Sudan during the civil war that was occurring at the time. Its aim was to help this community to escape hardship and introduce them to new lives in the modern State of Israel.

The Ethiopian Jewish people, who refer to themselves as Beta Israel, were discovered by European explorers in the 19th century. They are widely considered to be one of the greatest mysteries surrounding Jewish history, and several theories exist regarding their origins. For centuries, they lived in isolation from the rest of the Jewish world; nevertheless, they always had hope that one day they would be able to arrive in the land of Israel.

Operation Moses was instigated due to the Israeli cabinet hearing accounts of the persecution of the Jews in Sudanese refugee camps and devising the idea of an airlift to bring them to Israel. This commenced on the 21st November 1984 and consisted of several flights over a period of seven weeks, bringing approximately 200 Ethiopian Jews at a time to the Holy Land. In total, almost 8,000 Ethiopian Jews were transported from Sudan to Israel.

Prior to Operation Moses, fewer than 250 Ethiopian Jews resided in Israel. This number has developed into a population of more than 121,000 today, thus proving the colossal impact of this event in Israeli history as this figure largely comprises the descendants of those directly involved in the operation.

However, despite the ‘Ethiopian Jews’ almost always being viewed as one collective group, it is important to consider that each and every one of them has a unique story of their transition to Israel and that their lives have been affected in different ways.
One must not forget that the majority of the members of Beta Israel have had to overcome obstacles in order to assimilate into Israeli Jewish society. Many are still facing difficulties with fully integrating, and I strongly admire the courage and resilience they have maintained and currently still uphold.

Nevertheless, there is great hope in Israel that the Ethiopian community will feel increasingly confident and at home in the Jewish state, whilst simultaneously retaining the heritage they brought from centuries of Jewish life in Ethiopia. Over the past few decades, Ethiopian culture has become progressively understood and cherished in Israel and, had Operation Moses (and the later operations Joshua and Solomon) not occurred, the country would not be the same place as it is today.