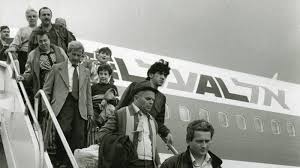 The 1990s Post-Soviet aliyah began en masse in the late 1980s when the government of Mikhail Gorbachev opened the borders of the USSR and allowed Jews to leave the country for Israel. Between 1989 and 2006, about 1.6 million Soviet Jews and their non-Jewish relatives and spouses, emigrated from the former Soviet Union, of this amount about 61% migrated to Israel. As the wave of emigration began, Soviet Jews who wanted to emigrate left the Soviet Union for various European countries and began gathering at transit points, from where they were flown to Israel, and the Israeli government ordered the national airline El Al to put every available plane at the disposal of the immigrants. Some Soviet immigrants also came by sea on chartered ships.The majority of the immigrant wave were Ashkenazi Jews; however, a significant proportion were Mizrahi groups such as Georgian Jews, and Bukharan Jews– with each ethnic group bringing its own distinctive culture to Israel. Direct flights from the Soviet Union to Israel carrying immigrants took place in January and February 1990. The first direct flight, which carried 125 immigrants, departed Moscow on January 1, 1990.
The absorption laws changed with time. The basic government grants given to each immigrant changed rapidly from the late 1980s to the late 1990s. Most of the immigrants initially located on the periphery and later dispersed to the "Russian" neighbourhoods. These were cities, mainly in the medium and lower socio-economic levels, in which immigrants constituted over 50% of all the residents. According to the Central Bureau of Statistics, the Soviet immigrants initially had a much lower material standard of living and much higher unemployment rates than the veteran population, however their situation gradually improved the longer they stayed in Israel. The group successfully integrated economically into Israel and in 2012, the average salary of Former Soviet Union immigrants was comparable to that of native-born Israeli Jews.