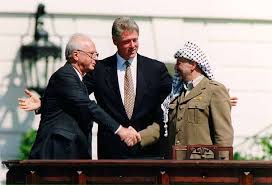 1992 marked the prime of my teenage years, for me an incredible time of optimism and hope .The music on the radio was littered with incredibly romantic vibes, the likes of Boyz to men, Whitney Houston, to the duo of Elton john and George Michael singing about the sun going down. This romanticism was coupled with a healthy pragmatism offered up by the alternative music scene, showing the spirit of youth revolution with nirvana , and hole and sonic youth ,letting us know the system was flawed and we had to take control.
In Israel, the rhetoric had been pretty damn boring the last few years under Prime Minister Shamir. Lots of attacks on Israel, huge retaliations followed by the usual international condemnations as well as the fear of the brief encounter with Iraq the previous year.
But suddenly in 92 an election choosing the 25th Knesset happened and out of it came the first labour coalition government in 17 years, led by the very incredible Yitzhak Rabin.
The minute he was elected, the rhetoric began to change. Pardons instead of expulsions were given to PLO activists, the peace talks in Washington actually begun to look like they had some direction, and holding back after another terrorist attack before flattening another Palestinian area became a feasible response.
It felt like a revelation that perhaps if we responded differently to the regular acts of hate, perhaps the results we would get would also be different .Meet hate with love, with empathy and with understanding. We had to try and push away fear in order to hold a space for new realities and possibilities.
Many were worried about this new approach, as it challenged everything we had ever known.
1992 for me represents hope and optimism that peace could happen, that real change would come and we would see peace in with Israel and Palestine.
It was an incredible time to be young, Israel loving teenager. And yet it feels today, like a lifetime ago……..I guess it was.