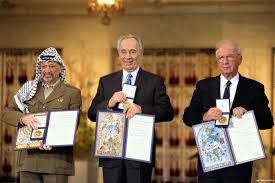 By Ariella Gould (Bogeret and Madricha)

On the 13th September 1993, one of the most widely circulated photos of Yitzhak Rabin, Yasser Arafat and Bill Clinton was taken on the White House lawn, signifying the first ever peace agreement between Israel and the Palestine Liberation Organisation (PLO). There was hope that this would pave the way for Palestinian elections to create their own council, which would replace the Palestinian Authority. This interim period was supposed to allow mutual trust to develop between the two nations and encourage them to further negotiate final status.

Following the signing of the document, Arafat sent Rabin a letter, confirming that the PLO now recognised Israel’s right to exist, it accepted the UN Security Council Resolution, which enshrined this, and would amend the sections of the Palestine National Charter calling for the destruction of Israel. In response, Rabin stated that Israel now recognised the PLO as the representative of the Palestinian people and that negotiations of peace should commence. However, the Accords remained silent on the most critical and contentious issues, the thorniest being the status of Jerusalem, which both sides claimed as their capital.

Many factors have been debated as to why the Oslo Peace Accords failed, including weak leadership from Israel, Palestine and America, the expansion of Israeli settlements and the increase in terrorist attacks from Palestinian groups. Personally, I think the reason there isn’t a single reason as to why they failed is the reason why they failed. Peace talks between Israel and Palestine are always going to be extremely raw and cause a lot of controversy because the diversity of opinions and perspectives on what has happened and what needs to change are enormous. However, the failure of the peace process screams one key message for international relations in the Middle East. The peace process has to first and foremost be built on trust because without trust, no compromise can ever be made.