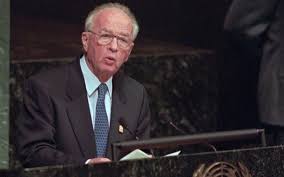 On 4 November 1995, Yitzhak Rabin was due to speak at a rally in Tel Aviv supporting the Oslo Accords. After the rally, Rabin walked down the steps of City Hall to his car, where he was fatally shot three times by an Jewish Israeli ultranationalist named Yigal Amir.

Amir was firmly against the peace process, and felt that Rabin's plans to withdraw from the West Bank was denying Jews their right to land in which they had reclaimed through settlement building. He was under investigation from the Shin Bet for his far-right activities, and the organisation were criticised in the aftermath of Rabin's death for putting the Prime Minister at risk.

The Oslo Accords still mark the greatest step towards peace between the Israelis and the Palestinians to date. They were criticised at the time across the political spectrum for many flaws, including no agreement on the status of Jerusalem, and some Palestinians today claim that the half-finished status of the accords has made their lives more difficult today, when the peace process is stagnant.

Despite this, in my opinion, Yitzhak Rabin was an incredible leader. He fought for Israel's independence, was the IDF Chief of Staff during the Six Day War, and served as Prime Minister twice. When I was on Drachim in 2017, we made a visit to the Rabin Museum in Tel Aviv during our closing seminar. The museum chronicles his life and achievements, and the last room is a panoramic view of his funeral, and the legacy he left behind. Rabin's skill as a negotiator and will for peace remains inspiring, over 20 years after his death. He had a vision for a better Israel that he pushed throughout his entire life to try and achieve, and his death marks of the darkest days in Israel's history.