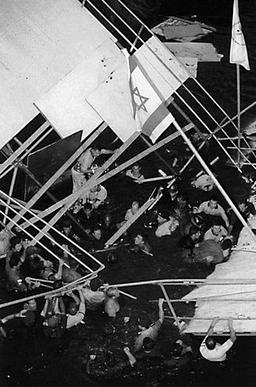 On July 14, 1997 a pedestrian bridge over the Yarkon River collapsed. The collapse injured 60 Australian athletes attending the 1997 Maccabiah Games. 4 people were killed, one due to falling from the bridge, and 3 others due to getting infections from the polluted river. The five designers of the bridge faced a criminal trial for causing death by negligence. They each faced a variety of punishments, from community service to 21 months in prison. However, many Australian Jews are angry that Yoram Eral, who was sentenced to six months community service, became an executive board member of the Maccabi World Union. They feel that Israel’s response to those guilty for collapse shows a disregard for Diaspora Jews from Israel.

I was interested to find a tragic event that has caused political divide between Israeli Jews and Diaspora Jews. I find it ironic from a political zionist standpoint that Diaspora Jews are not listened to in a zionist state. I think this event is very important in Israeli history as not only is it tragic but it is an interesting case study into the divide between Jewish people in Israel.