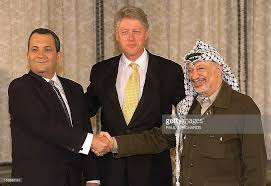 At the turn of the millenium, and 52 years old, the State of Israel endured a tumultuous year.

Events started to unfold in June, when Israel withdrew entirely from Lebanon, having invaded in 1982 and occupied a security zone (comprising 10% of the country) since ‘85. As a result of the Israeli pullout, the South Lebanon Army (trained by Israel) collapsed and Hezbollah seized control of the area. The following years saw several cross-border raids by Hezbollah, which would eventually climax in the 2006 Lebanon War. Despite support for an Israeli withdrawal at the time, in hindsight it may have been the catalyst that allowed Hezbollah to become so formidable and precipitated the 2006 War.

Separately, the Camp David Summit took place in July where Israeli PM Ehud Barak met with Palestinian Authority Chairman Yasser Arafat and US President Bill Clinton to negotiate a settlement of the Israel-Palestine conflict. However, the Summit broke down with both sides partly to blame.

It left both sides, in the words of journalists Robert Malley and Hussein Agha, with an “experience of how far [the two sides] had come and how far they had yet to go, and with the sobering wisdom of an opportunity that was missed by all, less by design than by mistake, more through miscalculation than through mischief.”
The summit was a reality check for the elusive hope that is peace.

The domestic situation deteriorated when Ariel Sharon, leader of the Likud Party, then the opposition, conducted a provocative visit to the Temple Mount, one of many sticking points in the peace process - and violent rioting broke out amongst Palestinian demonstrators leading to the arrival of the Israeli Army. Events escalated swiftly and led to the start of the Second Intifada - the second Palestinian uprising against Israel. Fighting would continue until 2005 - and in the last few months of 2000 alone, there were 100s of casualties on both sides. Ehud Barak was forced to resign as Israeli PM, under pressure from the Israeli right for not using enough force and from abroad for using excessive force. The poorly-timed visit to Temple Mount just sparked conflict - the real causes are complex. The breakdown of talks at Camp David was key to the rising tensions that led to the conflict and as before, both sides were somewhat to blame.

The events in 2000 highlight the need for open dialogue between both sides - and show that violence tends to escalate uncontrollably, and will rapidly burn bridges that took years to build. With a more nuanced understanding of the other side’s situation, more productive peace talks are possible.