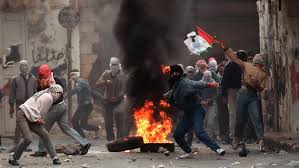 In 2001, the Intifada continued to rage on with around 670 people from both sides killed as a result of the conflict. Prime Minister Ehud Barak resigned following the failed agreements with the Palestinians and Ariel Sharon from the right-wing Likud party was elected Prime Minister.
Ariel Sharon was a decorated military commander, who had previously served as the Minister of Defence during the 1982 Lebanon War and was criticised for his role in the Sabra and Shatilla massacres. It was his decision to visit the Temple Mount complex, the site of the Dome of the Rock and the Al-Aqsa Mosque, in September 2000 that sparked the flames that would lead to the second Intifada.
Sharon did support a two state solution and embarked on a process of unilateral disengagement from the Gaza Strip and parts of the West Bank, which at the time was seen as a step towards a peace settlement.
However, his decision to build a wall that would separate Israel from the West Bank sparked debate within Israeli society and resistance among the Palestinians. The building of the wall would change the course of the conflict, separating the two sides from each other physically, but also mentally. The daily interactions between Israelis and Palestinians would be diminished as a result of the wall, thus enabling the fear and hatred of the ‘Other’ to further fester.
Some Israelis were against the treatment of the Palestinians during the early years of the Intifada, such as collective closures of Palestinians towns, the demolition of houses of the families of suicide bombers, and an increase in checkpoints restricting freedom of movement. Israeli Jews would travel to the West Bank, initially to provide humanitarian aid to the Palestinians, and later to assist them in farming their land and harvesting their olives. Such assistance and cooperation was only on a small scale, but its significance should not be underestimated, given the growing separation and animosity between the two sides.