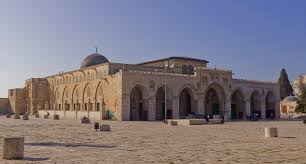 I was in Israel three times in 2015, for a total of two months. I spent a month in the Conservative Yeshiva and three weeks at the Hebrew University over the summer, and a week on a political trip organised by UJS in December. The atmosphere was noticeably different on my third visit. Violent clashes between Israeli police and young Palestinians had erupted on the Temple Mount / Haram al-Sharif complex, the enormous raised area where the Temple once stood and which is now home to the Dome of the Rock and the Al-Aqsa Mosque. Tension around the site had been building for some time due to Palestinian fears that Jewish Temple Mount activists would succeed in changing Israeli policy which currently gives control of the site to the Jordanian-funded Waqf, who ban Jews and Christians from any form of prayer or religious activity.

From afar, the Temple Mount / Haram al-Sharif issue might appear to be a scrap between religious fundamentalists on both sides, incidental to the conflict and a typical example of the need for embittered rivals to compromise and share. In fact, almost nothing could be further from the truth. In Jewish thought, the Temple Mount is the centre of the universe; for a rapidly growing proportion of Jewish Israelis (surpassing fifty percent right around now) the Third Temple will eventually exist there. Muslims believe it to be the place from which Mohammed ascended to heaven and spoke directly with God, and Al-Aqsa is the beating heart of Muslim Jerusalem and arguably of Palestinian identity. Almost no religious authority from either side has even suggested the notion of any sort of shared custody. No amount of diplomacy can rewrite the laws of physics to allow for two buildings on top of one rock (hat tip to Shaiya Rothberg at the CY who is, as usual, streets ahead of anyone else with the ridiculous but beautiful idea of an integrated Dome of the Rock / Third Temple).

If you want evidence of how much the site means, consider the fact that the violence on the site almost immediately turned into the Knife Intifada, three months of stabbing attacks by Palestinian "lone wolf" terrorists and fierce retaliations by Israeli security forces. There will be no peace without an answer to the Temple Mount question, and I haven't heard a feasible answer yet.